the part where I lose something...

So I made it through 90% of my vacation without screwing anything up too much (other than visiting Sydney in the midst of its rainiest summer in recent history), but yesterday night I managed to lose my grey, Manhattan Portage messenger bag. Luckily there's nothing irreplacable in the bag, but it did contain my camera, contact lenses, glasses case, and some things I'd borrowed from friends... as well as being a beloved bag.

In the unlikely (but hopeful) event that you, the person who found my bag, had the incredible insight to Google [Akshay Patil] and found this blog post, please know that you can contact me at akshay(a)alum.mit.edu. Thanks. 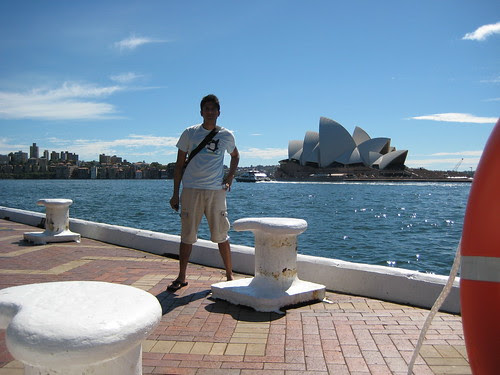 Heading off to the airport with Andrew C. soon to drive on down the Great Ocean Road for a few days. The weather here in Sydney has finally turned for the better -- reasonable stretches of sunniness punctuated by brief rain storms. I even went to the beach yesterday (boogie boarding is fun, currents were surprisingly strong).

I managed to knock off the two "must dos" of Sydney on Wednesday (the only gloriously sunny day we've had here) which were the Taronga Zoo and take a ferry to Manly Beach. I've now managed to not tour the Sydney Opera House twice now, thanks to tickets selling out and me showing up after they closed. Partially due to this, I've spent a fair amount of time wandering my way through most of downtown Sydney and getting a feel for how things are laid out. 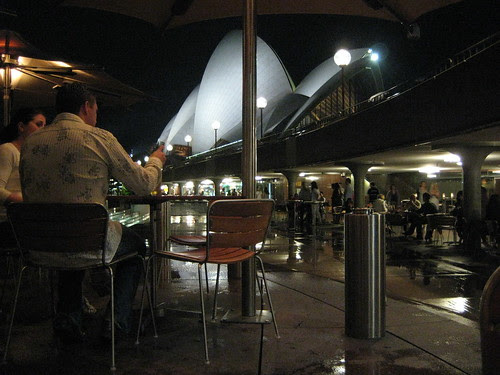 Don't have anything much more to say at the moment... I've been keeping notes and maybe I'll write up some posts whilst we're driving (or maybe I'll actually look out the car window). 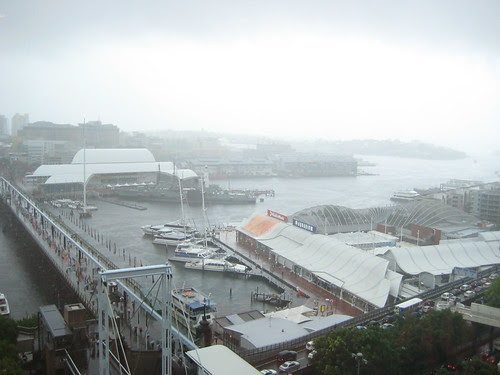 Well, I landed in Australia just in time to watch the Patriots lose the Superbowl in a bar full of what I assume were American students spending a term abroad (read: young, kinda annoying, drinking Budweiser, and generally Giants fans).
The other two downers so far are (A) I'm apparently allergic to much of Sydney (apparently a rare condition, judging from the utter lack of allergy medicine in their drugstores) and (B) it's very rainy/foggy here right now. Apparently this is going to last most of this week (ugh) but it's better elsewhere in the country, which I shall be venturing out to next week.

Oh, regarding the flight from SFO to SYD. I indeed had a middle seat and 14 hours is just about as long as I remember it being (I awoke from my one successful nap to find we were still only half-way there). When I bought the tickets, I indicated I'm a vegeterian with the intention of avoiding those mystery meats they serve in air. Well, apparently United decided to lump vegetarians with vegans on my flight (despite them being very distinct entries in their form online) so was served nothing but rice and vegan cookies all flight... so much for optimizing that parameter.

on my way out back

If it seems like I only blog when I travel, well, yeah. That's about accurate.

I'm in an utterly deserted United Airways terminal (does no one fly United and/or does no one fly on Saturday afternoons?) waiting for my flight to SFO where I'll switch planes and continue on my way to a two week vacation in Australia. Do I know what I'm doing in Australia while there? No. Should I probably have planned something by now? Yeah, probably, what whatcha gonna do about it? Vacations are about escaping responsibility and it turns out that just buying a ticket was almost too much to ask of me in the first place.

To prep myself for the trip, I'm working my way through Bill Bryson's In a Sunburned Country (generously lent to me by Ann V.) which has throughly sold me on two points:

I mention the last one because Australia really just chalk full of things that will kill you and seeing as I can't go a few weeks in the U.S. without having the hell bit out of me by bugs, I really do feel like I'm risking my life going on this trip. Oh well, there'll be sun (it's rainy season) and surf (full of jellyfish) and I'll be thousands of miles away from work (we have an office in Sydney). Should be fun =).

Naturally there were a lot of solid albums this year, including a number of very good albums by band you've already heard of (Killers, Arcade Fire). And there are some albums I'm pretty sure I'll like, but haven't had a chance to listen to (Jesca Hoop, Radiohead, Kate Nash). These were the albums that caught be by surprise and I'm happy to say I'm not sick of any of them yet. Check 'em out.