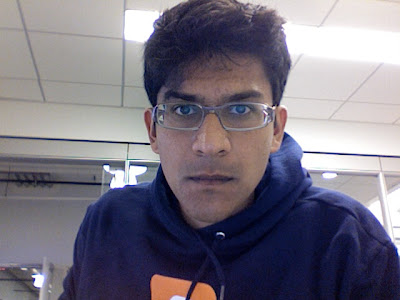 I get flak for not updating this blog often enough, so here I am... updating. I tend to over-expose myself to the internet through less direct means these days: flickr, facebook, twitter, etc. See q00p.net for all your ak-stalking needs.

Anyways, I'm sitting in the Long Beach Airport headed back to New York after a short romp through CA for Man Diego (photos), Work, and Mother's Day. I've been traveling a bit these days, including trips to Holland/Spain and Boston (Go Sox!), but I think I'll have a good month or two of staying put in New York City after this, which should be nice.

Outside of traveling, I've been helping friends work on a continuing side project of mine called PartyChat, going to concerts (Honeycut, Snow Patrol, Priscilla Ahn, etc...), exploring Manhattan, watching TV, eating cupcakes... the usual stuff. My point-and-shoot camera is busted, so I haven't been taking as many photos as I'd like to...
I don't think there's anything more riveting to say about my life. I'd like to get back to writing long-winded rambly reflections on subjects of no value, like I used to, so watch this space or unsubscribe from this feed, depending on your feelings on the matter.

Hrm, guess that'll have to satisfy people's hunger for the moment since it looks like my plane's about to start boarding. More updates later, maybe.
P.S. Included photo is courtesy of my new company-issued MacBook Pro -- I took the photo something like 2 minutes after I got it. I still love shiny new technology.